A PROTESTOR STANDS OUTSIDE OF THE CHOICES WOMEN’S MEDICAL CENTER IN JAMAICA AND CLINIC ESCORTS SEPARATE THEM FROM PATIENTS. EAGLE PHOTO BY KYLE CHOUINARD

Rainbow vests dotted 147th Place, a short side street off Archer Avenue in Jamaica, on a recent Saturday morning. The back of each vest read “Clinic Escort.”

Around 20 clinic escorts stood throughout the street, aiding those seeking care at the Choices Women’s Medical Center. The escorts were tasked with helping patients make it through the doors of the Jamaica health care facility without interference from the nearly two dozen anti-abortion protestors, who carried signs with renderings of fetuses claiming that, “babies are murdered” inside the clinic.

Since the United States Supreme Court overturned Roe v. Wade, the landmark decision that protected abortion access throughout the country for the past half century, the medical center has seen an uptick in applications to become an escort.

“We just keep getting more and more sign-ups to do volunteer work here,” said K, a 48-year-old clinic escort volunteer leader who wished to remain anonymous out of fear for their own safety.

The escorts, K said, help walk patients down the street past protestors and try to make them feel as safe as possible as they seek care, whether it be an abortion or other reproductive service Choices Medical provides. While only 20 escorts were out on Saturday, the program has hundreds of people within their sign-up system, the escort leader said.

“Our main job is to make the patients comfortable,” K said. “We are here for the patients to make sure they get from wherever they’re coming from within our vicinity … to the front door with the least amount of stress possible while there are a bunch of protestors out.”

A PROTESTOR STANDS OUTSIDE OF THE CHOICES WOMEN’S MEDICAL CENTER IN JAMAICA AND CLINIC ESCORTS SEPARATE THEM FROM PATIENTS. EAGLE PHOTO BY KYLE CHOUINARD

Not long after the clinic opened on Saturday, several protestors, taking turns preaching from a gray step stool, attempted to dissuade patients from entering the clinic and chastised escorts for aiding in “sin.” One of the protestors compared doctors who perform abortions to school shooters.

The escorts ignored the protestors, instead having quiet conversations amongst themselves and with those seeking care. Along with the clinic escorts, a security guard also stood at the entrance to the clinic.

J, another escort leader who also wished to remain anonymous for their safety, said that with all the people on the sidewalk it can sometimes be confusing for those trying to access the clinic to know if they are in the right place. One of the escort’s main jobs, she said, is to assure them that they are.

“[Escorts] get them to the door safely and answer any questions that they have on the way,” J said.

The conflict has its routine. Most protestors stand on the sidewalk holding large signs, while others actively engage with those entering the clinic. Many of the escorts stand in front of those on the sidewalk, attempting to separate patients from protestors.

During the Eagle’s visit to the clinic, one woman protesting followed a number of patients trying to get into the center as they turned onto the sidewalk. For 100 feet, she attempted to hand them pamphlets espousing her, and her fellow protestors’, religious views and anti-abortion stance. A clinic escort tagged along, trying to prevent the conversation.

The process happened over 10 times within one hour. 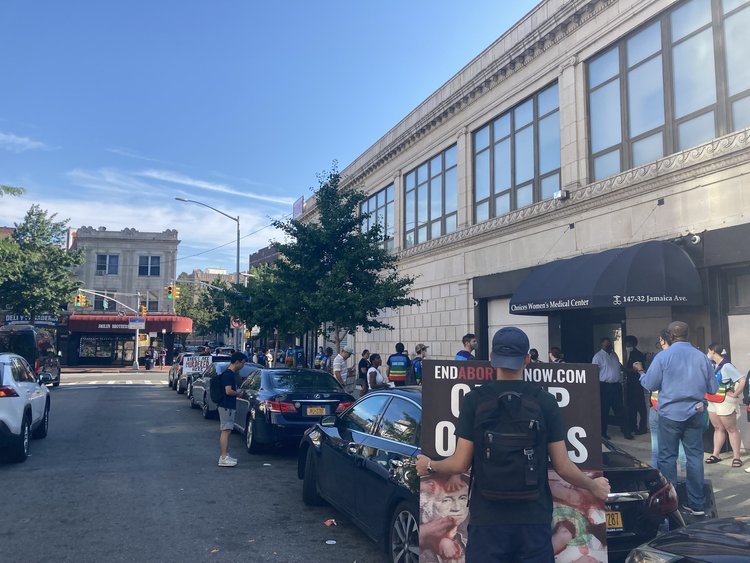 ANTI-ABORTION PROTESTORS OUTSIDE OF THE CHOICES WOMEN’S MEDICAL CENTER IN JAMAICA ARE BLOCKED BY VOLUNTEER ESCORTS WHO ARE TASKED WITH GETTING PATIENTS IN AND OUT OF THE CENTER WITHOUT CONFLICT. EAGLE PHOTO BY KYLE CHOUINARD

Throughout the morning, one woman protesting stood a few feet from the door, sometimes with a plastic fetus in hand.

“Choose life, choose life today,” she said to people as they walked into the clinic.

One man protesting at the center, a 26-year-old self-proclaimed evangelical Protestant, said he came to the clinic with Grace Baptist Church. He said the Woodhaven-based church comes out to the center about once a month.

“It depends on where the protestors are from, but most of them are from various religious theories,” said Mary Lou Greenberg, the outreach coordinator for Choices. “These people have a right to be on a public sidewalk. There is a First Amendment right and they have a right to express themselves, to try to pass out literature.”

Greenberg continued, arguing there’s a difference between handing out literature and trying to impede on a patient’s ability to access the center.

“They will use their signs as a way to stick it in front of the patients and some of them stand on the side and they call out to the patients that, ‘You see this? This is what your baby looks like,’” she said.

Organization for Women when the medical center came to Jamaica around a decade ago.

Just like the overturning of Roe, Greenberg said other political events, such as former President Donald Trump’s election in 2016, greatly increased the amount of people wanting to volunteer at the center.

“Abortion should be available to everyone who needs it, that’s what Choices feels,” Greenberg said. “This is part of an overall assault on women’s rights, on women’s very humanity, forcing them into the role of incubator.”

At one point in the morning, a woman arrived at the clinic, joined by a companion. They quickly became a target of the protestors. Though the escorts assisted the pair, the companion took it upon themselves to ensure the patient made it into the clinic safely.

Responding to the protestors directly, the companion repeatedly told them to “mind your business.”

Despite the protests, the patient opened the door to the clinic and walked inside.

Correction: An earlier version of this story had the incorrect name for Choices Women’s Medical Center.